Balustrades or Baluster: The vertical posts supporting the Handrail.

Black: Short for Black Steel. Black Steel is steel which is not galvanised. The name Black Steel comes from its appearance which is scaly and dark coloured.

Bore: The Hole, or the Size of the hole.

Brinell: Brinell is a measure of a material’s indentation hardness. Brinell is measured in units of HB, and more specifically as HBW if measured with a Tungsten Indentor and as HBS if a Hardened Steel Ball was used. Mild Steel is typically 120 HB, while Aluminium 6060 can range from 30 HB when Soft Annealled to 95 HB when processed to temper T651 (T6).

Brittle: When stressed, the material will fracture with no apparent deformation. Glass, Stone and Ceramics are brittle materials.

Butt Joint: A joint where two pieces are joined end to end without any special shaping.

CHS: Circle Hollow Section. CHS is referred to by its [Outside Diameter] x [Wall Thickness] (mm).

Clear Span: The distance between the two inside surfaces of the span supports.

Concentric: Having a common centre. A concentric circle is perfectly round.

Corten: Corten is a specialised steel with a Stablised Rust appearance. Corten is used for decorative purposes only.

Counter-Sink: To drill a conical shaped hole so that Screws & Bolts with a “CounterSunk Head” do not extend beyond the surface face.

Creep: Permanent deformation of an object caused by a steady load over a long duration of time.

Decorative: Having no structural function; for appearances only.

Ductility: The ability of a material to go through plastic deformation without fracturing.

Eaves: Roofing that overhangs the face of a wall.The eaves form an overhang to throw water clear of the walls.

Eccentric: Not perfectly circular, or, having different centres. Steam Engines use gears offset from the axle, which is Eccentric, for the purpose of converting rotary motion into linear reciprocating motion.

Elasticity: The ability of an object or material to resume its normal shape after being stretched or compressed.

Fascia: The band profile along the ends of the rafters.

Ferrous: Having iron content. All Steels are ferrous, not all steels are magnetic.

Fish Plate: A plate used to lap a butt joint.

Galvanising: A coating of zinc to a surface of steel which provides corrosion
resistance. Galvanising can be from Electroplating or from Hot-Dipping the steelwork in a bath of molten zinc.

Grit: A gauge of abrasives. 40-grit is very coarse while 1,000-grit is extremely fine with very small abrasive particles.

H-Beam: Universal Column. H-Beam is called H-beam because its cross-section resembles an “H”.

HRB: Hot Rolled Black. The Steel was shaped by rollers in a semi-molten state.

I-Beam: Universal Beam. I-Beam is called I-beam because its cross-section resembles an “I”.

Kg: Kilogram, the measurement of mass.

Kerf: The width of material removed when cutting.

Key: A Key is a machine element used to connect a rotating machine element to a shaft. The key prevents relative rotation between the two machine parts. The Gear in the image below has an internal Keyway Seat. 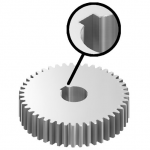 Linear: A product measured by its length. Linear Products include Angle, Flat Bar, Pipe, Round Bar, Square Bar and Tube.

Merchant Bar: A steel section that is hot rolled from a billet into a round, square, hexagonal or other shape.

Mezzanine: A low storey which is typically used as an intermediate landing between two floors.

M: Metre, a measure of length.

MM: Millimetre, one thousandth of a metre.

Outrigger: Framework extending laterally outwards for the purpose of increasing the stability of the main structure.

Pier: A column or post designed to take vertical loads from the superstructure.

Pitch-line: The notional line connecting the leading edge of all treads in a flight of stairs.

Plane: An imaginary flat surface that extends infinitely far. This Geometric Plane is used as a point of reference.

Racking: Forcing structural components out of plumb, usually by wind or seismic forces.

Rake: The angle of a slope. Rake is usually measured from the horizon.

Rd: short for Round. Usually refers to Solid Round Bar.

Rebar: short for Reinforcing Bar. Rebar is round steel bar deformed with ribs and is intended for reinforcing concrete.

Rod: Round Bar aka “Rounds”

Rotary: Rotational, or revolving around a centre.

Scale: The layer of iron oxide which forms on the surface of hot steel. Also referred to as Mill Scale.

SHS: Square Hollow Section. SHS is referenced by its [Outside dimensions which are both the same] x [Wall Thickness] (mm).

Skillion: A roof sloping in only one direction.

Soffit: The exterior ceiling on the underside of the eaves. “Soffit” is derived from French and literally means “something fixed underneath”.

Stanchion: A sturdy upright post that provides support for some other object. Stanchion are commonly used to support gates. Stanchion is pronounced as either “Stanchion” or “Staunchion”.

Tack Weld: A small weld used used to hold metal pieces in place. A Tack Weld can be easily broken off if a change needs to be made.

Tensile strength: The rating of a material which resists being drawn out or stretched apart.

Tie bar: A metal bar used for longitudinal stability or to keep abutting slabs in contact.

Torsion: Twisting of an object

Warping: Bent or twisted out of shape, especially from a straight or flat form.

Weep hole: A deliberate hole located near the bottom of an object which allows water to drain away.

All Prices Include GST

Ask us about Trade Accounts